In the Sea There Are Crocodiles: Home

Resources to enrich and support reading of Castleton University's 2015 FYS Summer Reading Book, In the Sea There Are Crocodiles by Fabio Geda

"Fabio Geda is an Italian novelist who works with children under duress. He writes for several Italian magazines and newspapers and teaches creative writing at Scuola Holden, the Italian school of storytelling in Turin. In the Sea There Are Crocodiles is his first book to be translated into English."  (Publisher website)

Read an interview
with the author and Enaiatollah Akbari, the subject of the book

Read the entry from Biography in Context on the author (Subscription resource. Log-in required for remote access)

Learn about the book 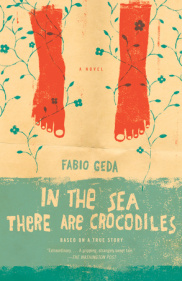 "What would you do if, when you were ten, you were left to fend for yourself, and, in order to survive, you had to undertake a harrowing journey all the way from Afghanistan to Italy?

In early 2002, Enaiatollah Akbari’s village fell prey to the Taliban. His mother, fearing for his life, led him across the border. So began Enaiat’s remarkable and often publishing five-year ordeal—trekking across bitterly cold mountains, riding the suffocating false bottom of a truck, steering an inflatable raft in violent waters—through Iran, Turkey, Pakistan, and Greece, before he eventually sought political asylum in Italy, all before he turned fifteen years old.

Here Fabio Geda delivers the moving true story of Enaiat’s extraordinary will to survive and of the accidental brotherhood he found with the boys he met along the way. In the Sea There Are Crocodiles brilliantly captures Enaiat’s engaging voice and humor, in what is a truly epic story of hope and survival, for readers of all ages." (from the publisher's website)

Click on the image above to see the route of Akbari's journey.  You can zoom in and out, and see images of the places he traveled through. (Story map by Keighan Chapman, Geography Pedagogy Instructor)

Interview with Fabio Geda, about the book, in English

An interview with Enaiatollah Akbari (in Italian)

An interview with the author and Akbari (in Italian)

Reviews of the book

From the Guardian (UK)

From the Independent (UK)

The book is about a young man who had to flee his homeland and had a harrowing journey as a migrant, including crossing the Mediterranean.  There are many stories in the news lately about others desperate to get to safety in Europe.  Here are some recent news stories.